Image: A group of midwives we met at the PIES de Occidente office.

It is February 14 – Valentine’s Day: Die de la Amistad and we have a special ceremony with Mayan woman priest Dona Chonita.

Our shuttle leaves at 7:45 am driving through narrow village roads, almost grazing roofs and walls in order to reach the ceremonial site – a semi-open cave set in a small hillside. We have a short walk through a trail and unload a box of candles and paraphernalia for the ceremony.

The cave is open almost half open-half closed, with the altar set up in the back. The altar has fresh flowers and a couple of crosses. To begin, Dona Chonita asks each one of us to walk up to the altar and state our name while we hold one of the stones lining the front of the altar. The walls and roof of the enclosed portions of the cave is covered in black soot from previous ceremonies. There are two square stone slabs set into the ground where Dona proceeds to set up the fire pit for the ceremony.

She cleanses the site before she begins because she is not sure who might have used it or for what purpose. She asks permission from God, nature, spirits and ancestors to proceed. She cleanses each one of us by smudging. When I stand in front of her with arms out, I feel scrutinized like I am at an aiprot security with an electronic device. Except Dona Chonita lights a bunch of what might be cedar or sage to rid us of any undesirables. After that, she pours sugar, because it is provided by nature, from a plastic bag to draw a circle on a stone slab. Then each one of us goes forward to set out four small containers, that seem to be made of a peat moss like material, around the edge of the circle. 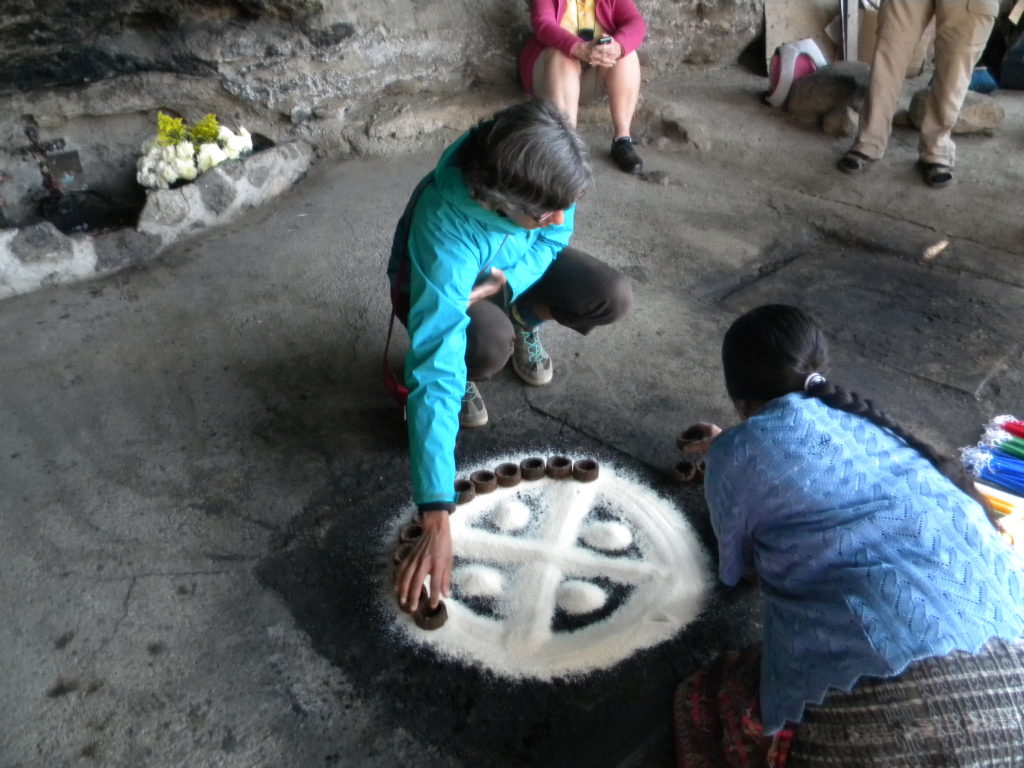 She lights the red candles, and invites Patricia, our tour leader to light the black ones. She asks 4 others from the group to light the other colours. Luckily I put my hand and get selected to light the white candles. Every time we approach the centre, and move around it, we are always walking in the anti-clockwise direction and completing a full circle before we step out. Soon the fire is burning away. Dona Chonita asks the spirits to bless Horizons of Friendship which has just begun a $15.2 million Maternal Newborn and Children’s Health initiative in Guatemala. She sought blessings for each one of us for our life ahead. At another point, she handed each one of us a bunch of candles and asked us to circle the raging fire and throw our candles into the centre as we remember relatives or friends who are no longer with us. She continued to tend to the fire while calling to the spirits for blessings and described what the fire was telling her – there were a couple of us who were afraid of the fire (not me!), there were a lot of emotions present at the site (not me I promise – they had mostly resolved when I left Spanish school) and the ashes formed a hand-like shape indicating to her that Guatemala was extending a blessing hand over us. As the fire started to die down, each one of us was blessed by her by sprinkling water.

Half way through the ceremony, I was amused when Dona Chonita faced the outside world and made a call on her cell phone to invite her apprentice to come and help her, although that didn’t materialize.

A lot about the ceremony reminded me of Hindu pujas or rites, done for various occasions. The priest is  often calling on ancestors, or reciting the name of the person making a request through the chants and ending with a blessing.

Neil, who is a Jew, observed how fire is used in Jewish rituals as well. Geraldine, an indigenous woman from Canada, comments on the similarities with smudging and calls on spirits. The colours of the candles also matched the colours in the medicine wheel.

The commonality among different older traditions always reminds me that at the heart all spiritual traditions are a means to connect with the Divine.

With soot on our hair and moved by the Mayan ceremony, we make our way to meet a group of traditional midwives, who are part of Horizons’ Maternal Newborn and Children’s Health program.

We meet Dr. Iris Champet, the project leader at PIES for the MNCH program. PIES is a 23-year-old non-profit organization whose mission is to involve vulnerable people, especially women and indigenous people, in the health system. Their objective is to create sustainable health care systems in western Guatemala through direct involvement and ensuring methods meet the cultural values of the Mayan population. 83% of the region covered by PIES is rural and 93.6% of the people are Mayan K’iche.’ Birth by midwives at home in this large region is 67% compared to the national average of 27%. Infant chronic malnutrition for this region is 70% compared to the national average of 46%.

We meet five comadronas (midwives) who have been in their profession for 18 to 36 years. The women did not come into their profession by choice. Often it is a gift you come with or a choice made by the community. Or you inherit it from your mother or grandmother as 10-year old Magdalena did. Even as a baby, Magdalena was carried by her grandmother when she attended to births at home and continued accompanying her. At age 10, her grandma was sick and asked Magdalena to assist with the birth although she had not been trained at all. For her own pregnancies, Magdalena was able to diagnose and adjust a breech baby in her womb by massaging during the pregnancy. Juana’s call came to her in a dream when she woke up to a baby crying, but it had been just a dream. The next day she was helping her sister deliver her baby and soon her remote community was calling on her services.

The women told us one of their biggest challenges has been longer labour and more complicated births in recent years compared to when they started their profession. “Our work would be much easier if the women had quick labour. Because we’re often waiting in the cold, without food,” said one of the midwives. They arributed more difficult pregnancies to lifestyle and diet. Rosa, another widwife, said that Mayan cultural and spiritual practice during the pregnancy and childbirth have been lost (with the advent of Christianity) and that could be another reason as well although the women do use some traditional plants for hastening the delivery and to help with lactation.

Until a few weeks ago, the government wasn’t acknowledging the contributions of midwives, so the midwives from PIES rallied together (with funding from Horizons) and made a trip to the capital demanding recognition. The result is that the government proclaimed May 19 as Midwife Day and promised a stipend of 3000 quetzals ($600) a year. Otherwise, the women rely on meagre amounts from the family like 100-150 quetzals ($20-$30) for all the work before and after one birth!

The midwives were looking forward to a Canadian delegation of doctors, nurses and midwives arriving on February 20 to receive training on complicated births, saving lives, modern medicines and to pass on the training to newer recruits. And this was possible because of funding from the Canadian government to Horizons and in turn PIES to build capacity among local midwives to tend to women at home for an important milestone for mother and child.

With images of these brave midwives continuing to help with the tradition of birthing at home, I get off the shuttle to walk towards the hotel, but remember just in time to yell to Laurel to call first dibs to shower and wash off the soot from morning’s ceremony.

Day 14 – No breakdowns or breakthroughs!