Lessons from a Lost World

Lessons from a Lost World

The temperature is climbing to 32 C in humid conditions in Guatemala as we head off towards Tikal, one of the three biggest Mayan settlements in North / Central America. We drive through peaceful and untouched green landscape that extends for miles and miles.

Tikal was a thriving Mayan community from 800 BC to 900 AD, but was discovered only 150 years ago when workers went into the forest and found ancient buildings, some as tall as 70 metres high, engulfed and kept hidden by a dense forest, very much like the discovery of our Ancient Forest in Dome Creek!

Our guide Eulogio (meaning: the one who thinks) nicknamed Locho was my highlight of the day. He is a gentle and older man who mesmerized me with his stories.

Only 15-20% of the Tikal buildings, spread over 16 square kms, has been excavated so far. Walking in-between and into the buildings and monuments, I imagine myself walking through a bustling community of 90,000 people, at its peak. The Mayans were a complex civilization with roles divided by classes – kings and queens, high priests, astronomers, engineers, labourers, servants and more. Tikal’s buildings are designed for great acoustics. Hence the name Tikal – the place of voices or spirits.

As Locho describes the buildings and people, I am reminded of its similarities with the Egyptian pyramids and Roman amphi-theatres. The complicated layout and irrigation system reminds me of the Indus Valley civilization of 5 million people that extended from Afghanistan, Pakistan to northern India circa 3300-1700 BC. Our guide shows us the astronomical buildings atop which astronomers would spend time drawing and designing the complex and accurate Mayan calendars based on the sun, moon and Venus and which can point to many past events and predict others in the future. 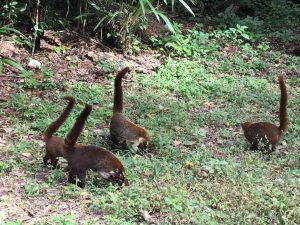 The pizote (above) from the racoon family, spider and howler monkeys, peacock-like-turkeys, and numerous birds kept me entranced at Tikal. 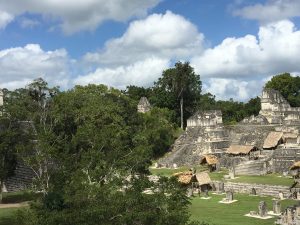 Five of us climb Temple IV – the 70-metre high and tallest building in Tikal. The view is breathtaking and immediately brings back images of one of my favourite movies Crouching Tiger, Hidden Dragon where the martial artists are traversing trees with the dexterity of monkeys combined with Spiderman. One of my tour companions Neil stands beside me on the stone steps on top on Temple IV and says, “This is what God feels like.” “I correct him – You mean the high priests.” Apparently, only the high priests and priestly staff had been privileged to climb up the temples.

As we walk through the forest, my hands are tingling in response to the energy of the place and I comment to Locho. He confirms that the Mayans located their community in the middle of nowhere mainly because they saw it as a sacred site tuned to receiving cosmic energy. Locho said even now, Mayan people come to Tikal to perform rituals when they have big problems in their community or to seek blessings before they plant a crop.

Locho’s mother was Mayan and had moved to Guatemala City for work. But she faced a lot of discrimination and when she married Locho’s father, decided to disown her heritage as she didn’t want her children to suffer like she did. However things are improving since 1996 when the Guatemalan government signed an agreement to acknowledge and support Mayan culture and traditions.

As we walk, we see different flora and fauna. Locho points to the different trees and tells us its uses and declares, “The Rainforest is a huge pharmacy!”

As I piece together the stories and the intelligence of the Mayans, I am confused. I ask Locho,” If the Mayans were so advanced when it came to Astronomy, Engineering and Architecture, then where is all the knowledge? Are there Mayan people who still hold this information? Why is the modern world re-inventing tools to rediscover what was known?” Locho tells me that in those heirarchical societies, the knowledge was concentrated among a elite few, and wasn’t known by everyone. And that meant, the information was gone when the Mayan civilization was lost.

Locho confirms again what I have been understanding through my study of Community Economic Development in the last two years: That sharing knowledge is sharing power. And when we’re all empowered, we’re engaged in the well-being and future of our community.

I want to learn from the mistakes of the Lost World and help co-create a new world, a new Tikal, if you will – a place to be open to different voices as well as the guidance of spirits and a world that values diversity and shared leadership.